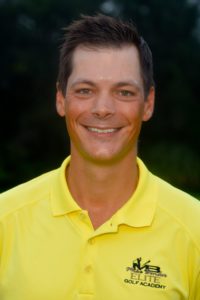 ​John Weir is the founder of the Mental Golf Academy based in Lake Mary, Florida and is the mental performance coach to elite junior, collegiate, and professional golfers from around the world. John is the developer of the Mental Golf Type® system, the author of Golfer’s Guide to Mental Fitness, and the creator of The Mental Caddie subconscious conditioning program.

John started working with the Mike Bender Golf Academy at the end of 2014.  Since then he has been the mental coach for the MBGA Elite Program, the Junior Champions Program, and many of the individual students at the academy.  In addition to his work with individual players, John has also achieved success working with collegiate golf teams. During his first two seasons working as the mental coach with Seminole State College Women’s Golf Team, the team won their first NJCAA National Championship in 2015 and was runner-up in 2016. In his first year working with Concordia University Men’s Golf Team, the team won their first American     Southwest Conference Championship in 2016 and the team made their first appearance in the D3  National Championships.

Throughout the years, John’s work has been featured in many media forums including TV, radio, magazines, and newspapers. Some notable features include ESPN Radio, FOX Sports, and Golf Talk Live. John had a feature article in Golfer Mag (a Scottish publication) as well as a   contributor to a mental game article in the Golf Magazine October 2014 issue. John was a speaker for the Proponent Group at the 2016 PGA Trade Show and a keynote speaker at the 2015 San Diego Golf Fest. Most recently, John’s “Stoplight” pre-shot routine concept was     presented on Golf Channel Academy by MBGA instructor Cheryl Anderson.

For the last sixteen years, John has been helping his clients take control of their minds to achieve personal breakthroughs utilizing the most effective applied psychology and mental    fitness tools.  John’s diverse educational background includes: psychology alumnus from Point Park University, NLP Master Practitioner, Board Certified Hypnotist/Instructor through the       National Guild of Hypnotists, and Mental Fitness Coach. His Mental Fitness Golf Certification Course has been offered to mental coaches and hypnotists from over 60 countries. John is a recognized authority in the hypnosis profession and the recipient of numerous awards including the Ormond McGill Award for faculty member of the year as well as being the youngest person in the NGH’s 65 year history to be inducted into their Order of Braid – the highest honor given for lifetime achievement.